""The Itchy & Scratchy Show" Theme" is a recurring song from the animated television series The Simpsons. It is the theme song for the titular fictional cartoon series describing the constant fight between the titular two characters.

It is performed by a High pitch chipmunk chorus.

They Fight! And Bite!
They fight and bite and fight!
Fight, fight, fight!
Bite, bite, bite!
It's the Itchy and Scratchy Show! 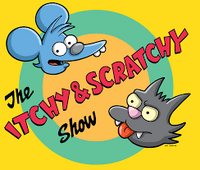 The Itchy And Scratchy Friendly Theme - The Simpsons
Friendly
Add a photo to this gallery
Retrieved from "https://villainsong.fandom.com/wiki/%22The_Itchy_%26_Scratchy_Show%22_Theme?oldid=20587"
Community content is available under CC-BY-SA unless otherwise noted.